17 replies to this topic

Screenshot shows it all.
https://newsbusters....n-control-daily

Regular CNN viewers will have noticed that since Tuesday, CNN's New Day and a number of other CNN shows have been displaying an on screen tabulation of the number of mass shootings and deaths from mass shootings so far this year, in much the same style the network had been using to keep track of COVID death statistics.

What a sick and twisted mentality. Sent from my iPhone using Tapatalk

I guess CNN isn't much of a news channel are they? 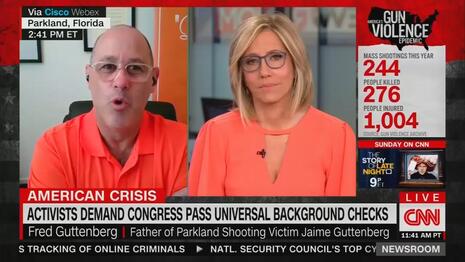 "Demanding" compliance with statist ideologies? No thanks.

They are practicing for their future.

Violence and force is what criminals understand!


Will the guns pass the background check? Gun violence right? Not people violence...

You cannot have it both ways...

"Demanding" compliance with statist ideologies? No thanks.

Is that just the city of Chicago numbers ?

Leave the gun. Take the cannoli.


On another CNN note, Jeffrey Toobin returned today after a seven month absence.

Following a rather longish discussion of the reason for his absence, they proceeded with a discussion on gun control. It was his thought the the recent California ruling that we might support would ultimately stand, ending their AWB and possibly changing the landscape in our favor re mag restrictions, CCLs and such.

I expect there will be some Toobin jokes here... SNL has featured his troubles twice along with jokes on a number of other shows. I expect he will be on a straight and narrow path as he attempts to rebuild trust and credibility.

Cover those zoom cameras with a piece of tape or something, even though you think you turned them off!

Life is a cooperative venture... That's what makes it work.

It's similar to their Covid tracker, which they had up on the screen all of last year.

Hmm.  I guess they thought it worked back then, so why not use it again to push more BS.

I do not remember the last time that I watched CNN, probably years ago.

If I did watch it, their gun tracker numbers would just be more justification for me to carry.

Numbers I saw posted this week show their top show barely pulled 900K in prime time (Cuomo) and that was total views, not how many sat down for an extended period.