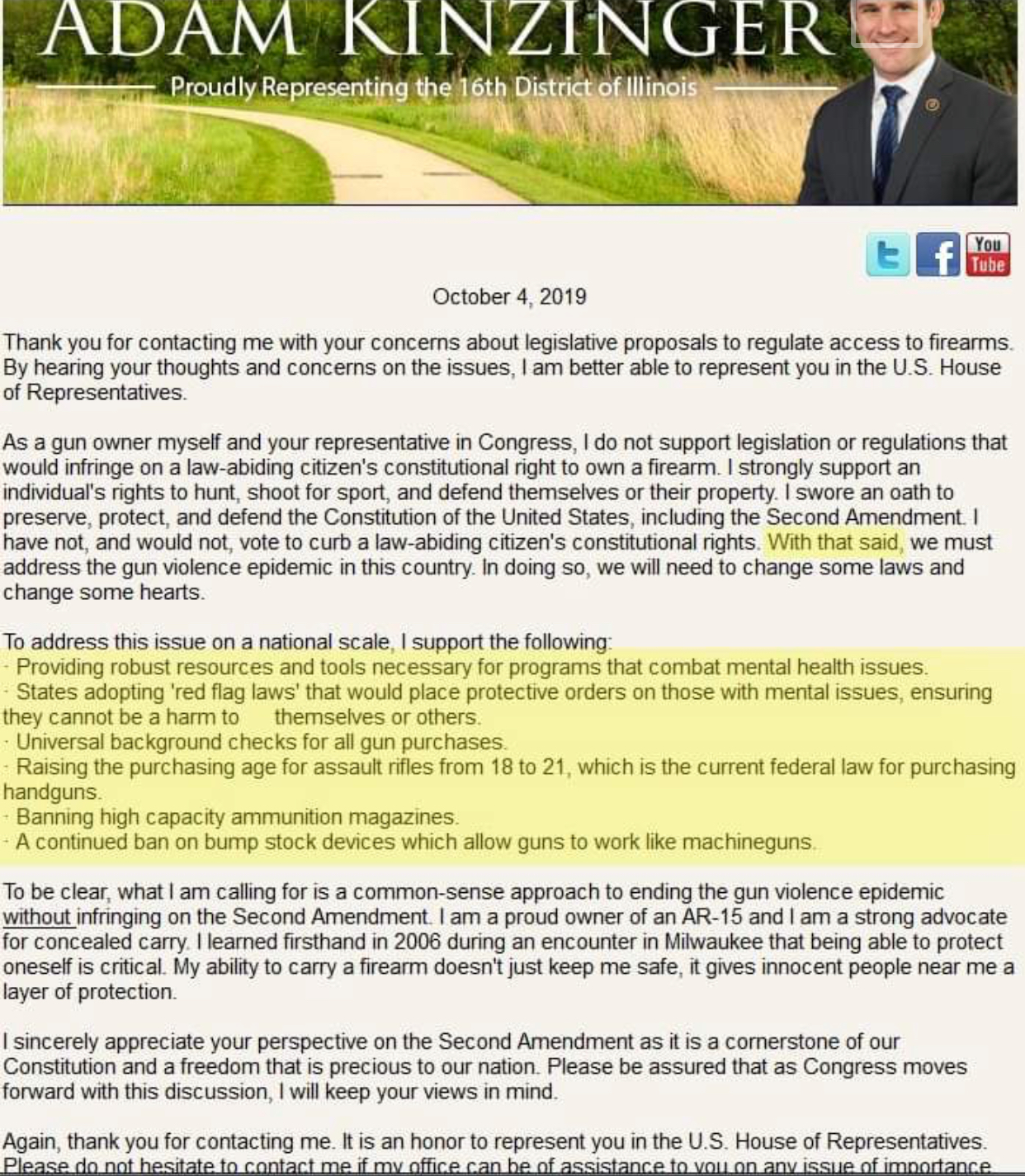 Plus his being a never Trumper on top of that. He is my 'representative' but he won't be getting my vote again.

What he calls 'high capacity' magazines are actually standard capacity magazines, and one is included with each AR-15 purchase. I'd wager that the AR-15  he says he owns came with a 30 round magazine as well.

In IL we get background checks done with each purchase, so that wouldn't affect us. The red flag laws he babbles about WILL be abused, you can count on that.

“A people that elect corrupt politicians, imposters, thieves and traitors are not victims... but accomplices.” -- George Orwell

Can't say I disagree with his first 4 points - but magazine capacity is a red herring and has NO cause/effect relationship to criminal activity, and bump stock are a stupid waste of ammo and not a hill I choose to die on.

I suspect that yet again the anti 2A Dems are fabricating a massive manure sandwich from which the pro 2A types will need to scrape off many layers before a law is passed? But a manure sandwich of 'some' type is in all our futures I'm thinking.

Says he supports the 2A, then supports legislation that violates the 2A. And red flag laws violate the 5th and 14th Amendments.

If they want to make purchasing age at 21 then no more 18 , 19 , and 20 year olds joining the service.  No reason for them to die for their country when they can't buy a rifle at that age.

Says he supports the 2A, then supports legislation that violates the 2A. And red flag laws violate the 5th and 14th Amendments.

when someone claims they support the Second Amendment and the next word is BUT ... they don’t support the 2A

In my best Trump voice, total loser. Sent from my iPhone using Tapatalk

If I didn't know better, I would think he was a Dem. Hope a true conservative can run against him  next time he runs in a primary.

If I didn't know better, I would think he was a Dem. Hope a true conservative can run against him  next time he runs in a primary.

How is banning standard (their "high") capacity magazines not infringing the 2A? Illinois is the world's largest RINO preserve!

Tell those guys on the south side shooting each other up every weekend to follow these laws too and maybe I’ll work with you.

"Always remember, your ability to shoot and have a firearm makes it so that you are not subjected to the whims of other people without your permission. So, in other words, if you don't want to get raped, robbed, pillaged, or plundered... get a gun."
-Clint Smith

His support for these quasi-gun control talking points put him to close to being a "Blue Falcon".

Next time he has a 'coffee with your commie.....errr representative, perhaps someone might mention the fact that abandoning the 2nd Amendment is the same as dishonoring the oath to preserve and protect that thing we call a Constitution.The same Oath he took twice, now that I think about it.

For the past couple decades, IMHO, most all elections have come down to the lesser of two poor choices.

Says this geezer whose aldermope IS Ed Burke.

Here's your alternative to Kinzinger.

I know I'm not voting for her.

Kinzinger revealed himself, when he became Captain Queegs puppy dog before the end of his first term.