39 replies to this topic

...The company, America's largest retailer, said it will stop selling handgun ammunition and ammunition for short-barrel rifles after selling all of its current inventory. Walmart (WMT) will also stop selling handguns in Alaska, the only state where it still sells handguns. And Walmart will request that customers no longer openly carry guns into its 4,700 US stores, or its Sam's Club stores, in states that allow open carry.

However, Walmart will continue to sell long barrel deer rifles and shotguns and much of the ammunition for those guns. Walmart will also continue to allow concealed carry by customers with permits in its stores...

Ammunition that can be used in high-capacity magazines on assault-style guns, as well as all handgun ammunition will no longer be sold in stores, the company said. Walmart ended the sale of handguns in all stores except those in Alaska over two decades ago, but will now stop in the state as well....

...In response to the shooting in its El Paso store last month that killed 22 people, Walmart said Tuesday that it would stop selling certain types of ammunition that are commonly used by hunters but can also be used in military assault rifles.

The nations largest retailer made the announcement after weeks of discussion about how best to respond to the violence on Aug. 3. The company said that after selling through our current inventory commitments it would discontinue the sale of certain short-barrel rifle ammunition and all handgun ammunition.

Walmart had stopped selling the type of assault-style rifle that was used in the El Paso shooting several years ago, but the companys chief executive, Doug McMillon, said the retailer recognized the need to do more to make the country safer....

IB, me thinks you are now the newly minted official news article poster of IC......

I did not look in the Walmart thread and the other did not show in a search when I started composing.

This is going to make buying ammo a pain. One overpriced LGS and a long drive to the Bass, Cabelas, or other stores like Mega or Point Blank but plenty of Walmarts close by.

Maybe this explains why my local hasnt been getting restocked with .22LR, 38 spl, 380, 9mm

A month ago, in El Paso, Texas, a gunman with an assault-style rifle launched a hate-filled attack in our store, shooting 48 people resulting in the loss of 22 innocent lives. Just a few days prior, two of our associates were killed by another associate in our store in Southaven, Mississippi. And hours after the shooting in El Paso, our country experienced another mass shooting in Dayton, Ohio. This weekend brought tragedy to Midland and Odessa, Texas.

In Southaven and El Paso, our associates responded to anger and hate with courage and self-sacrifice. Our immediate priorities were supporting our associates and the impacted families and cooperating with law enforcement. In parallel, we have been focused on store safety and security. Weve also been listening to a lot of people inside and outside our company as we think about the role we can play in helping to make the country safer. Its clear to us that the status quo is unacceptable.

After visiting El Paso on Aug. 6, I mentioned that we would be thoughtful and deliberate in our responses. Were ready to share our next steps.... 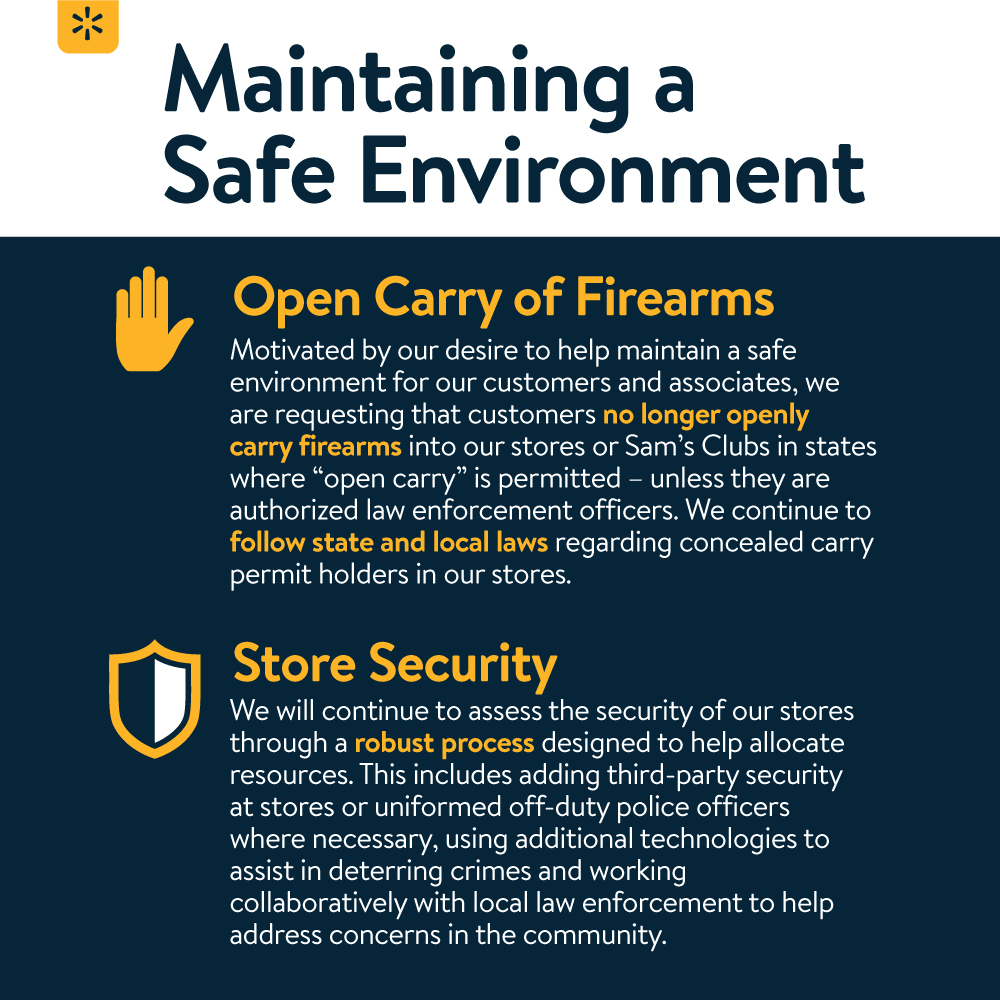 During the ammo shortage, I bought a lot of ammo at Walmart because of how and when they stock, but lately I have been giving the business to the local Farm/Fleet stores as they are more gun freindly, prices might be slightly higher but well within the ballpark, and it's not an utter hassle like Walmart where they have to always track down an employee with a FOID to sell it to you.  Plus the selection and stocking at Walmart lately sees to be hit and miss many times and has been scaled back in many stores around me.

McMillon said that he would send letters to the White House and congressional leaders that "call for action" on "common sense" gun safety measures. McMillon said Congress should debate re-authorizing the assault weapons ban and expand background checks.

Im working on getting them to ban shotgun shells, since the can be used in assault style and SBR shotguns 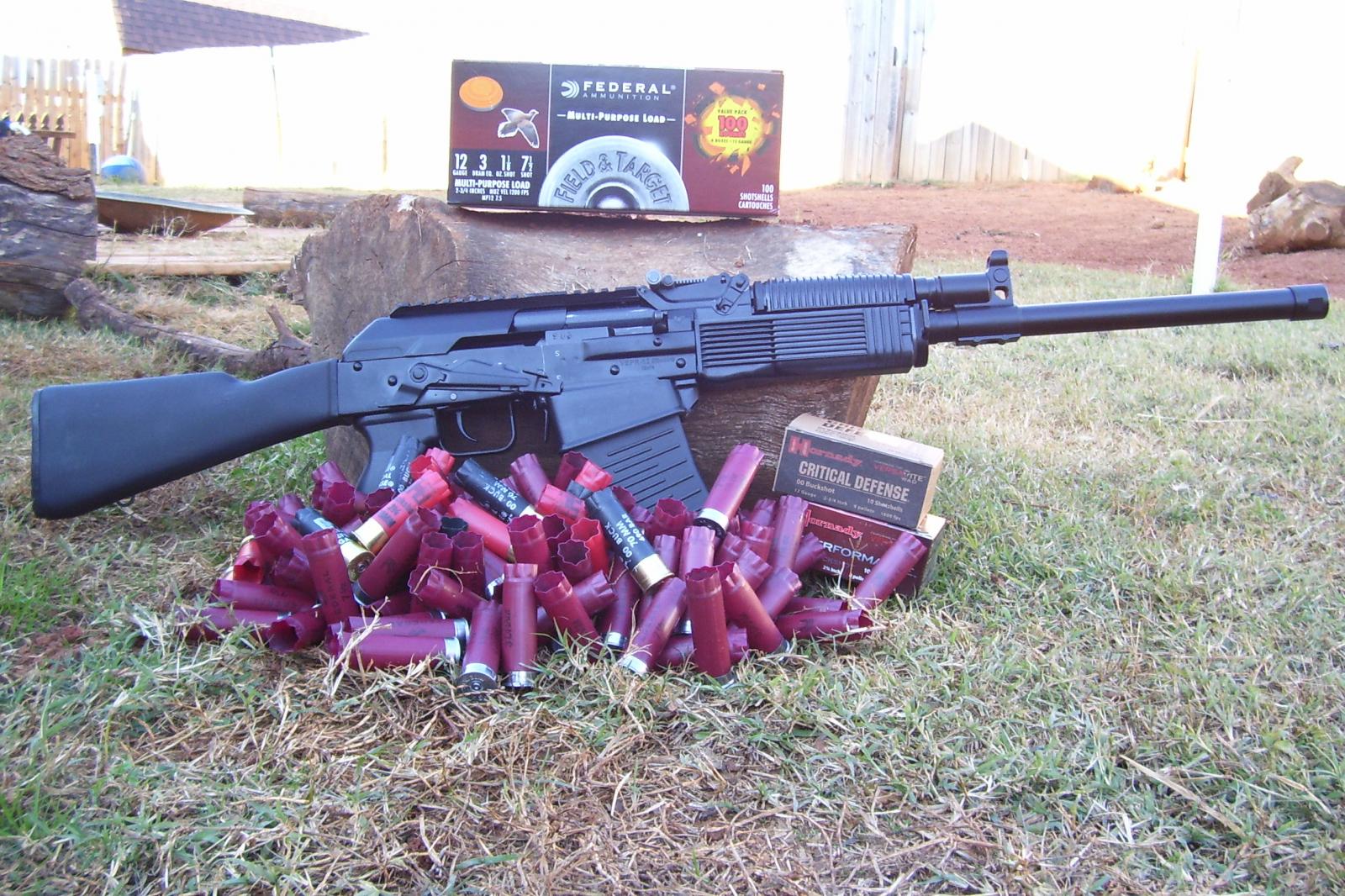 One more reason not to go to Walmart

Im working on getting them to ban shotgun shells, since the can be used in assault style and SBR shotguns

I wonder how long .308 will stay. Their notice says ammo "like" the other banned ones. They surely know of the AR10. As for those evil semi-auto shotguns they become an assault weapon with only 6 or more shells One more reason not to go to Walmart

That is the way we feel, over the last 10 years we have cut back on Walmart shopping drastically, only go there for an occational item now abd agaub or to grab loss leader clearance items when they rotate seasonal items.

I forgot about the 30.06 in the Garand. I was originally thinking of it in the bolt action 1903 and it would be safe.

Stopped in and picked up a few boxes of Federal brass 9mm for $7.97 a box. Even the employees think it's retarded

Looks like the LWW (borg) has assimilated another store.

What is SBR/Assault ammunition? How pathetic of Walmart. Their customers who value the Constitution will stop shopping there. They are part of the conspiracy to take away our 2nd Ammendment rights. Haven't bought ammo there in years since the last panic when they raised their prices and started gouging their customers.

If Tyranny and Oppression come to this land, it will be in the guise of fighting a foreign enemy.
James Madison

I also had to stop by my local walmart...
There was relatively plenty on the shelves...and there were another 1/2 dozen folks there as well.
Heck...it was the first time...EVER...that I didnt have to wait for somebody to be 'found' to sell that ammo!

Chatted with other folks...and the employee's at the counter.

One was just 'giving the facts'.. The other, much nicer, while still having to represent the store, clearly thought it was moronic to stop selling...

(Had to take the picture to remember the day I last set foot in a Walmart... I'll keep the receipt as a souvenir.) 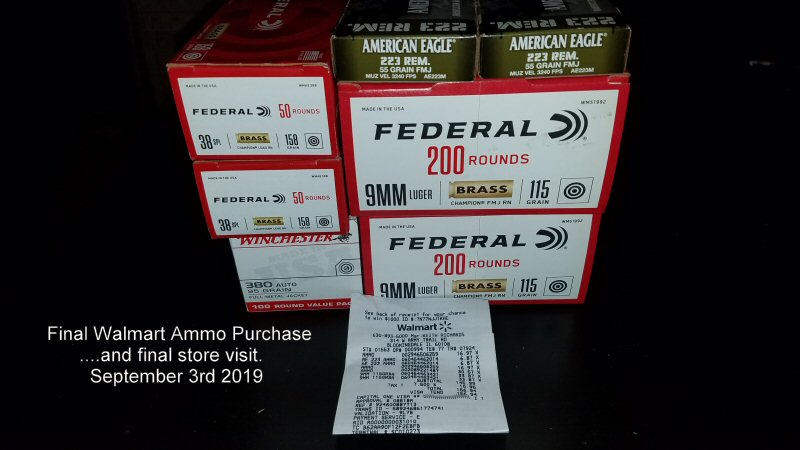 What is this "large capacity clip" Walmart refers to?

"I can't spare this man. He fights."  Abraham Lincoln

What is this "large capacity clip" Walmart refers to?

Just wait until the antis are informed that the muzzle energy of a colonial era muzzle loader is about equal to that demon .223/5.56 round!!!

Just wait until the antis are informed that the muzzle energy of a colonial era muzzle loader is about equal to that demon .223/5.56 round!!!

Soon we will be forced to stealing wheel weights from cars to cast our 58 caliber ball rounds!

Wal-Mart could go the way of K-Mart and Sears soon.

Another corporation committing suicide by political correctness. Really does not matter, around here their ammo selection sucks! i buy at Rural King or Academy Sports and outdoors. Rural king has best price on guns!

Get your emails into uncle Doug and explain hes not the greatest CEO.

They are a private company as we all know.  However, there are places in this country that have had all of the mom and pop stores shut down due to Walmart and they are the only game in town.  Ceasing to sell common self-defense ammunition (which is what this decision is) can have the effect of disarming the very people that have a 20-30 minute wait for the police to respond.

Yes, there are other stores but driving 100 or more miles for ammo is beyond a lot of people's means.  All while Walmart pats themselves on the back and virtue signals their ability to defend themselves away.

Just like with Google and the talons they have in everything, all it takes is for a private company with a near-monopoly to get political and it can have huge consequences.

But, hey, at least they can still hunt /s

They are a private company as we all know.

No. It's a publicly traded company, as we (should) all know, so management's duty is to maximize profit for shareholders, not maximize social justice warrior-ship with Alyssa Milano. Not make some political statement. This shows the sheer arrogance of C-suite management at Walmart. They don't care about customers or shareholders. This is, arguably, a breach of fiduciary duty. They have no duty to prevent "mass shootings" their only duty is to increase stock price. This won't do it. Sent from my VS987 using Tapatalk

Just like with Google and the talons they have in everything, all it takes is for a private company with a near-monopoly to get political and it can have huge consequences.

But, hey, at least they can still hunt /s

Google and Walmart are both public companies.

Kroger is set to open higher today on their no-open carry announcement.

I am disappointed with Walmart's decision. I have shopped at Walmart for about 20 years, almost exclusively for groceries and sundries, including ammo. The same with Sam's club. Sam's club gas is $.20/gal. cents cheaper than anyone else around here.

That being said, I will no longer shop there. Everything I need is either online at Amazon or at Meier's, Woodmans, or Costco. I will pay a little bit more, but I have a very hard time dealing with any business that caves to a relative handful of employees with SJW feelies and tries to be virtue signalers and wimps.

Seems to me, that their biggest competition from the 70's and 80's used to be Kmart. Kmart caved on guns and ammo, (think their spokesperson, Rosie O'Donnell), and where are they now?

Dick's virtue signaled no more 'evil guns', and they just took a $8 Billion downstep in finances because of it last quarter, I think.

Perhaps the CEO of Wally thinks the lib-turd whiners in NYC and Hollyweird will start start shopping at the Wallyworld stores 50 miles away from their uber jazzy lib/commie/anti-rights enclaves to make up for the loss of customers, but I kind of doubt that will happen.

I'll tell them "Good by Walmart. So long Sams" when I stop in for the last time to pay my final bill later this month.